Gold Medals for Germany and Belgium

Germany’s Merle Brunnée won the long distance duathlon world championship. The men’s gold medal went to Belgium’s Seppe Odeyn. Some top athletes gave up. The weather conditions were extremely difficult. There was continuous rain and low temperatures. – Switzerland reached podium places in the men’s race with Jens-Michael Gossauer (silver) and in the women’s race with Sarah Noemi Frieden (bronze). The 32nd edition of the traditional event in Zofingen had to be postponed in 2020 because of COVID-19, first to May 2021 and finally to September 2021.
The World Duathlon Championships took place yesterday in continuous rain and low temperatures of 12 degrees Celsius, demanding everything from the athletes. Thus the Powerman in Zofingen lived up to its nickname “Showerman”. One day earlier, on Saturday, there was beautiful autumn weather.
The World Duathlon Long Distance Championships (10 – 150 – 30 km) was already exciting before the competition, because two prominent top athletes could not start. The current title holder from Belgium, Diego van Looy, could not compete because he had a serious accident during training a few weeks ago. Due to illness, Frenchman Gaël Le Bellec, who had triumphed in 2014, 2015 and 2018, also had to withdraw at short notice. Thus, the Belgian Seppe Odeyn, the winner of 2016, and the Russian Maxim Kuzmin, the winner of 2017, moved into focus. Also during the competition it remained exciting, both in the elite women and in the elite men.
Gossauer in front from the start
After three hours, Switzerland’s Jens-Michael Gossauer led the men’s race ahead of Angelo Vandecasteele (BEL), Simon Jorn Hansen (DEN), Daan De Groot (NED), Seppe Odeyn (BEL), Matthieu Bourgeois (FRA), Michael Pfanner (SUI) and Yannick Cadalen (SUI). Before the last transition zone, Seppe Odeyn (BEL) took the lead. He took the gold medal at the “toughest duathlon in the world” in 2016. In 2015 and 2017, Odeyn finished in a very good second place. Odeyn led before the last third of the World Long Distance Championships ahead of Matthieu Bourgeois (FRA), Jens-Michail Gossauer (SUI), Daan De Groot (NED), Simon Jorn Hansen (DEN), Angelo Vandecasteele (BEL), Richard Lustenberger (SUI), Michael Pfanner (SUI), Marco Corti (ITA) and Michail Ott (SUI).
Odeyn then continuously extended the lead and finally crossed the finish line after 6 hours and 6 minutes and 41 seconds with a lead of over twelve minutes over Gossauer and Bourgeois. World Champion Seppe Odeyin the first statement at the finish: “I had not paid much attention to the weather forecasts. It was Belgian weather. Maybe that was an advantage for me.” Silver medalist Jens-Michael Gossauer: “That was my hardest day in in my life, I fought extremely. Now I’m happy.”
Disappointment for Swiss women 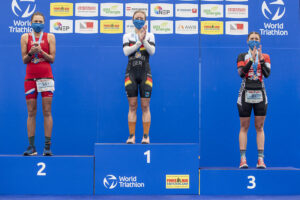